Guest blogger Elizabeth Nyitray is the 9th – 11th grade History teacher at The Community for Learning (TCFL). She and Dennis Negron (the 10th – 12th grade Science teacher) created and taught a cross-curricular project about the Great Depression. The project took on a life of its own and eventually touched every student and teacher in the school. Lizzie recounts their adventure below.

Which smartphone do you have? Is it synced with your laptop? How about those Bluetooth speakers?

So much of our lives today are influenced by business, advertising, and invention. Yet unless we major in business, marketing, or engineering, we never really learn about the intricacies of the institutions that run today’s society (and much of our personal lives).

After a successful experience combining 11th grade Science, and Social Studies in a WWI simulation last trimester, Dennis and I decided to continue combining Science and Social Studies together in the second trimester. While studying the Roaring ’20s in Social Studies, the students were making simple machines (specifically pendulums) in Science class. One might wonder what these have to do with each other… and it took us, as teachers, several tries to figure it out as well. 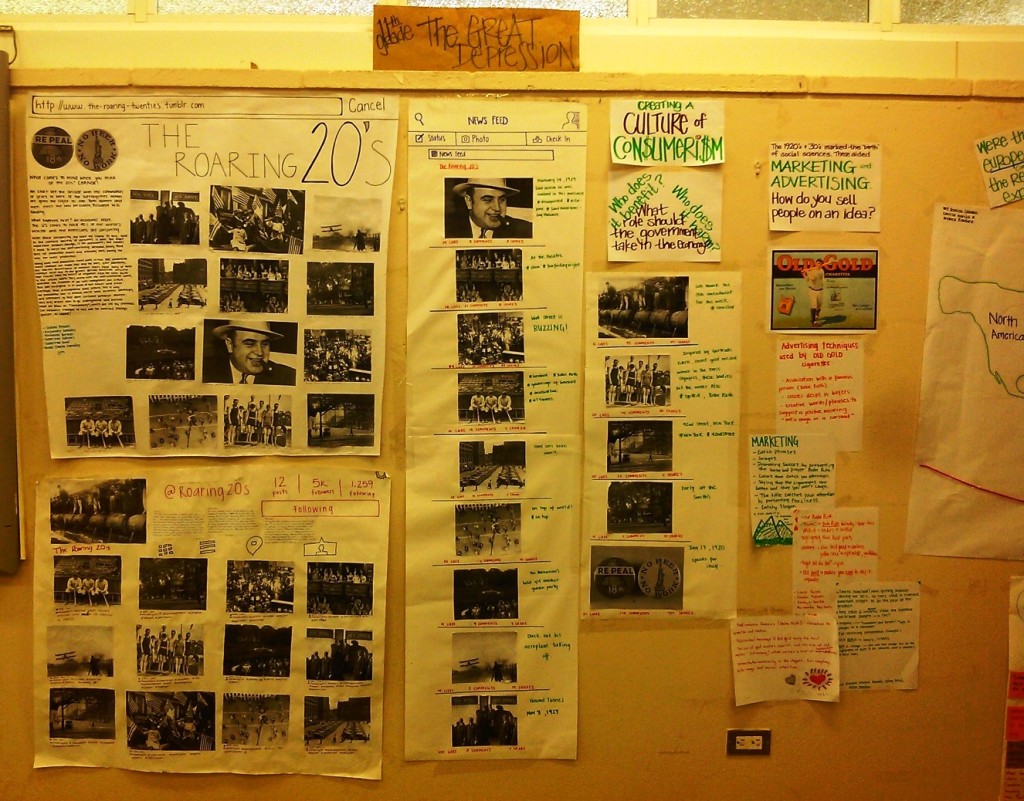 The pendulum was an invention that was born 500 years ago in the Renaissance, yet is used to this day. However, the true importance of the pendulum lies in how it revolutionized other inventions and affected the idea of measured time itself. If it were not for the value that humans place on time, the pendulum would be nothing other than a weight swinging from the end of a string.

The evolution of inventions can be seen over and over again in the Roaring ’20s when the U.S. embraced a culture of consumerism. While our students were collecting materials to build a working pendulum in Science, they looked at the ways we make inventions relevant through marketing, and the influence this has on a society… with numerous examples from the Roaring 20s.

In small groups, the students were given the following task:

“The Roaring ‘20s in the U.S. gave birth to the culture of consumerism that moves the world’s economy today. You are to capitalize on this culture by creating, marketing, and managing a small business around a new invention that you design.” 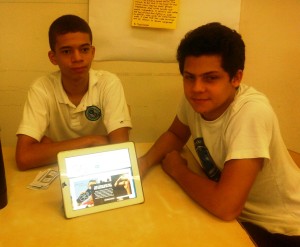 Over the next 2 weeks, the students spent their time designing a company website, brainstorming and building their invention, and creating a Prospectus for future investors. They would work on their invention and the materials required to make it in Science class, and then design the marketing and financial sides in Social Studies class. After much research (done by both teachers and students), much assistance from a teacher gifted in economics (Lincoln Sampong)and much trial and error, all of the groups were prepared to launch their company websites and share their prototype with potential investors. 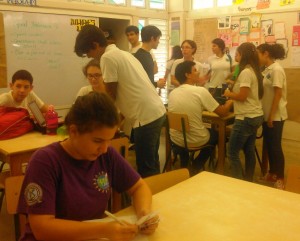 All company websites and inventions can be found here: 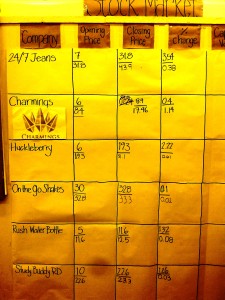 Just as it happened in the Great Depression, the initial investors were somewhat “uninformed.” So, one day, we distributed  $10,000 in photocopied $500 bills to all high school students with instruction on how to invest during recess. The stock market officially opened and the 11th graders put into practice all they had learned about finance, marketing, and sales.

Throughout the next 2 weeks, the Stock Market opened for trades during homeroom and recess hours. Investors were asked to keep up with the latest news, which was posted daily in the Social Studies classroom (“Wall Street”) and on  the TCFL Facebook page. Additionally, we posted opening and closing prices, along with capital value. Parent and teacher investors were invited to participate and invest $5000 virtually.

Company reports are posted and the market opens 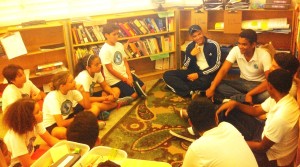 Next came our toughest and most involved investors – the 5th graders, who happened to be studying the Great Depression as well. Each got $1000 to invest. They studied each company’s website and came to the Stock Market with a list of how they wanted to distribute their money. Some changed their minds upon speaking with the company founders about how well their stock had been doing, but others stuck to their original plan. 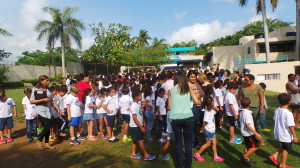 Then, natural disaster struck. With the aid of Lincoln, our World Bank consultant, and the 12th graders, we held an earthquake drill and played a “Public Service Announcement” about an earthquake that had caused great damage to Santo Dominog. This was to simulate the “Dust Bowl” natural disaster of the late 1920’s in which a great drought hit the Midwest and left crops destroyed and those who lived of of farming in total poverty, while obviously affecting the prices and sales of many goods. 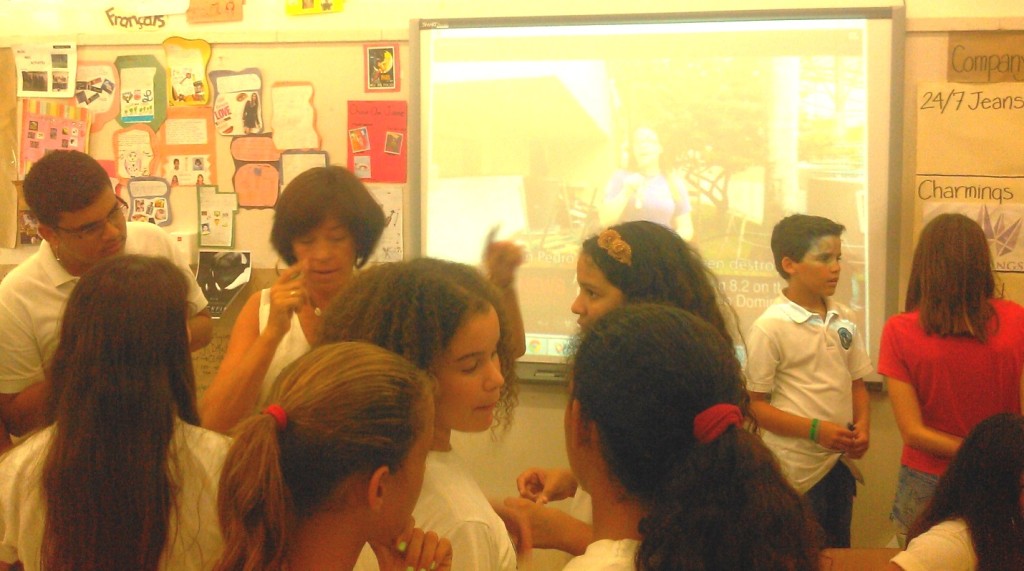 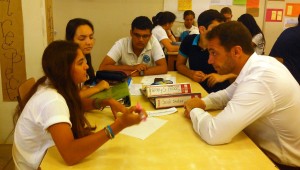 Somewhat distraught, certain the 11th grade company founders asked, “So that’s it? Our business is gone?” While other smirked as they had built their “factories” in the U.S., meaning they did not get hit wiht as much damage. Students had to figure out how to adapt their company to the damage that had been caused, as well as twist their business to cater to the needs of a nation in distress. For this, we had guest speaker Tomothe Graziani of Riskality Consulting Group (a risk management specialist), come in and meet with each company, advising them how they could make a comeback after a natural disaster. 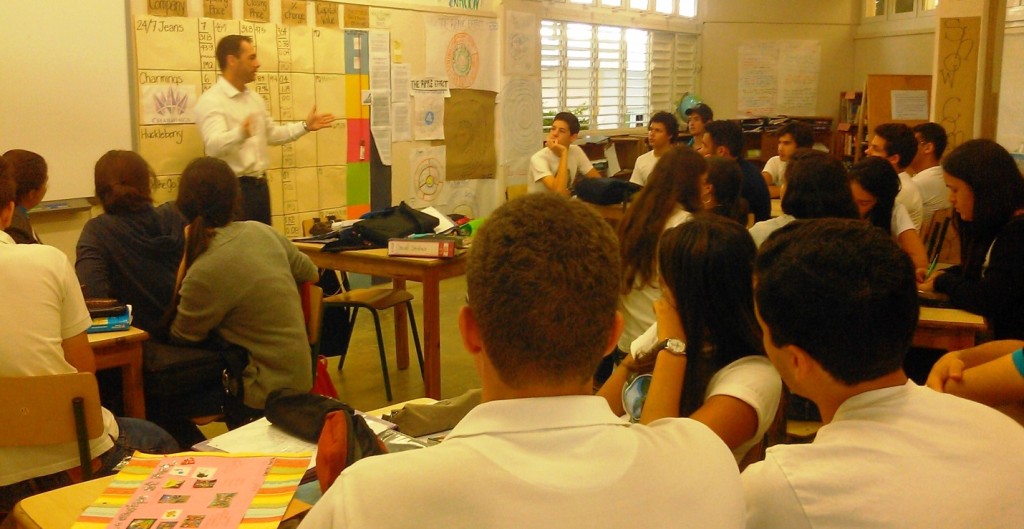 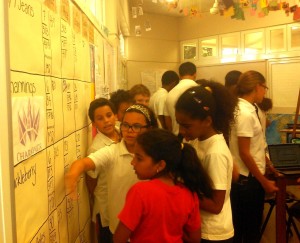 As often happens, a few of the company founders decided to pull out of their business and create a competing company that catered specifically to this time of crisis. 11th graders watched as the 5th graders and high school students stormed the classroom to demand their money back so they could invest it in the newly created company, “United Bank RD.” Businesses also took a blow when they found out that the “Parent-Teacher Bank” failed, so all of the money that the parents and teachers invested on credit was gone as well. They whined as their stock values plunged, living through a miniature version of the Great Depression.

This project turned out to be a much greater ordeal than we could have imagined. It wouldn’t have been possible without the help of all the school staff, who pitched in their areas of expertise and humored the young salespeople who approached them about investing.

One of the most gratifying rewards was seeing the students have to step outside their comfort zones in order to be successful. The studious students who work wonderfully on paper had to hone in on their people skills. The mathematicians had to get creative and the artists had to do math. Simultaneously, however, everyone’s strengths were valued, since they all became important at some point in the process.

Everyone’s efforts paid off in the end, as the students got to experience the Great Depression firsthand, along with having a much deeper understanding of what goes in to “creating” an invention, the sociology of marketing and advertising, and the worlds of business and finance. In the end, we all “got down to business” in this hands-on activity much more than we expected to!

Lizzie was kind enough to provide all of her rubrics and project outlines for the cross-curricular program. If you’re interested in them, just click on the links below: