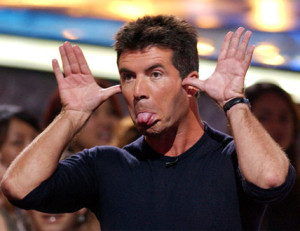 I have never had cable television at home and therefore have never watched much TV. But a few weeks ago, our internet provider let us know that our phone and internet bill would be slashed in half if we had cable. We argued the point (I mean, really, does this make sense to anyone?) but the phone company stood firm – no cable, no deal.

So I was introduced to the fine world of modern television. Let me tell you, things have changed since I was a kid and last watched this stuff – and I’m shocked by what I’ve seen.

Shows like America’s Top Model, American Idol, and Fashion Police seem to be all about ridiculing people:

Three or four judges gang up on someone, giving nasty criticism and laughing at them as they stand there and try to take it. The victims (yes, victims, what else can you call them?) try to be courageous, but the pain shows and often they begin to cry. Audiences seem to love it. I’m astounded. Is this what we think is funny? Clever? Are these our role models?

As an educator, I work hard to help kids understand what bullying is, how it makes people feel, and how to stop it. Bullying is something we all need to worry about – the statistics are scary. At TCFL, our kids are familiar with the roles of the bully, the victim, and the silent witness. We’ve seen a notable decline in bullying because of the in-depth way we work with bullying, but I’ll describe that in another post.

What I want to look at now is how society is celebrating bullies and how much harder it makes it for us to teach kids to be “nice.” I don’t mean to say that these kinds of TV shows are the sole cause of bullying – there are many reasons behind bullying that we need to address. However, TV shows reflect our culture, and if we watch these kinds of shows and laugh, we’re sending the message that this is funny, this is okay. And it’s not.

If these are students’ role models, if they see that people are paid to be mean on TV, how can we expect them to behave differently?

No wonder our kids think that hurtfully criticizing someone is funny.

These shows are not funny. They are not okay. We need to stop them and the only way to do that is to turn them off.