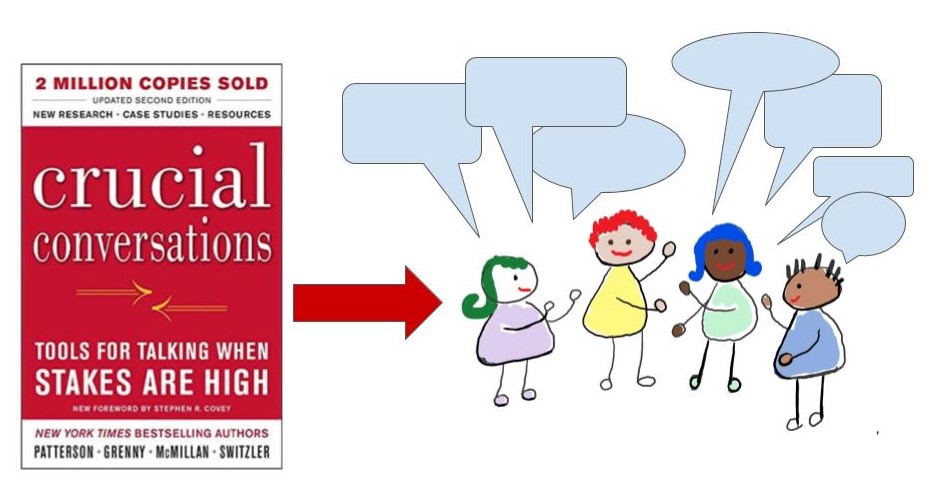 Several years ago my son introduced me to what I consider a life-changing book: Crucial Conversations by Kerry Patterson, Joseph Grenny, Ron McMillan, and Al Swizler. This book gave me tools for tackling difficult conversations in a way that would ensure that both parties understood each other and came our winners. It’s a book I have to return to often to refresh my memory as I work on my communication skills — there are many lessons to remember and these changes don’t come easily!

As I’ve been working to help high school students develop their leadership skills, I’ve taught them the use of “I” statements, how to apologize sincerely, and how to monitor their body language to convey respect and openness. But, as students faced difficult conversations, I realized that I had never explicitly taught them how to manage these. I thought that the lessons in Crucial Conversations were a great way to empower students. But at the same time there’s so much to learn… how could I simplify these lessons so that my students could remember them and put them to use quickly?

One of our high school classes was having difficulty agreeing on fundraisers and making decisions as a class. *Anna, the class president, and *Pedro, the vice-president, came to ask me how to manage a few students who tended to be negative — complaining behind their backs, mumbling dismissive comments during class meetings, and generally getting in the way of decision-making. I decided this would be an opportunity to teach students how to lead a crucial conversation. I started out with a few simple lessons.

Make sure everyone feels safe

Allow a free flow of ideas

After I went over the basics with Anna and Pedro, they asked the three students who were giving them problems in to discuss how they could improve classroom meetings. I was simply there on the sidelines to observe and mediate if necessary. Before the conversation, I asked everyone to use “I” statements rather than statements of blame. I was happily surprised at how the conversation went:.

When I debriefed with Anna and Pedro they admitted that they weren’t aware of the feelings some of the students had. They had been feeling under attack without taking into account that they were also responsible for some of the class negativity. They were surprised at how effective the conversation had been for clearing the air and finding solutions to their problems. We discussed the fact that this wasn’t a magic bullet — they were going to run into a number of conflicts throughout the year, but the skills they’d learned would help them navigate these difficulties.

If you haven’t read Crucial Conversations, I highly recommend it for improving leadership skills. Effective communication is an important life skills to teach our students. If you have any any other methods you use to help teach kids to communicate more effectively, I’d love to hear them.

Here are some reminders of the steps I taught my students. feel free to pin, print, or share to keep these tips handy — for either yourself or your students!