Teaching students the meta-cognitive skill of self-assessment empowers them and puts them in charge of their own learning. Although it can seem like another task to add to an already overwhelming workload, when teachers explicitly teach self-assessment skills, students become more independent, self-motivated learners, giving teachers time to work more closely with the students who need extra attention.

Last week, I observed an incredible math class in action. As the teacher, Ailyn, reviewed material for an upcoming assessment with her eighth graders, she consistently checked for understanding, then used that information to reteach as necessary. But what impressed me most was that, throughout the class, she asked her students to assess their own understanding using techniques they were obviously familiar with, effectively handing the reigns of their learning over to them. 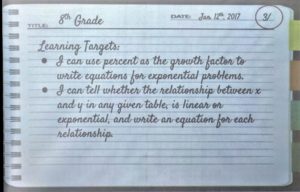 Ailyn started her class by projecting the two learning targets they’d been working on recently onto the whiteboard. She asked her students to explain the targets in their own words. As they began to discuss what the first target meant, different students added their own ideas, and there was clearly some confusion. Aylin helped clarify their thinking through a series of guided questions, such as:

When a student answered a question, Ailyn would respond with feedback like: “Yes,” “Awesome,” “Who can add to that?” or “Not quite, any other ideas?” Then, after the discussion, she re-explained the general rule for exponential equations and said, “Remember, you can find it on the chart in that corner over there,” as she pointed to a chart on the wall. 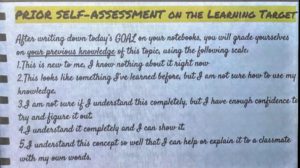 Ailyn then asked students to put up a number of fingers that reflected their understanding of the learning target. They were obviously familiar with this routine, but she projected the self-assessment rules just in case. Most of the students put up three or four fingers. Finally, she gave them an assignment to complete in groups that she said would help them solidify their understanding. 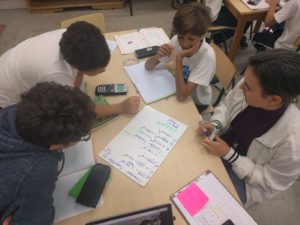 Once they’d gone over the lesson, she wrote down four questions to check their understanding and they got to work. She asked them how long they thought they needed to complete the problems. They said, “about five minutes,” so she set an alarm on her phone and told them she would be back to check on their work. Then she quickly went to conference with other students. Ailyn told me that the timer helps the students stay focused, but that she actually sets it for herself, so that she doesn’t get too caught up in working with others and forget to come back.

When the alarm went off, Ailyn returned to the table. Student A said, “Ailyn, we’re confused.” The other two laughed and agreed. Ailyn asked them to explain what confused them, then began to to work through their uncertainties with them.

At the end of the individualized lesson, she asked the three students to self-assess again. One student gave a thumbs up for scientific-to-standard and a so-so thumb on standard-to-scientific. She gave them a short assignment to work on at home, then asked them to check in with her tomorrow.

Here are a few of the strengths I saw in Ailyn’s class:

So far, this technique has been extremely effective: all of Ailyn’s students who struggle with math have seen a significant improvement in their grades on evaluations. They may not all be reaching mastery yet, but they’re on their way. And, most importantly, their confidence is growing, allowing them to take the risks necessary in order to keep improving.

The class I observed was an expert combination of organization, analysis, advance planning, and patience.  When a teacher can make this tough juggling act look smooth and easy, you know you’re in the hands of a master.