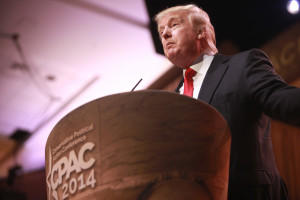 Along with many of you, I have watched, aghast, as Trump collects followers from every part of the U.S. and from every level of society. There are many theories out there about how this man has gained such popularity: a populace that is disgruntled with governments that don’t represent them, angry over a weak economy and a dying middle class, and fearful of just about everything (but especially terrorism and the loss of the American way of life).

But as an educator, I have to say I believe there’s a little more to Trump’s following than this. How does a man who has virtually no political experience and who spouts words like “I’ll make America great again” — without ever explaining how he plans to do so — gain supporters?

I think we have to put some of the blame on the education system. When we instill a system that focuses primarily on multiple-choice testing and memorization over critical thinking skills, we can’t be too surprised when people blindly believe ridiculous rhetoric that is unsupported by any sort of strategy. We need to seriously think about the tests we are giving our students and the way we are forcing teachers (who know better) to educate. We cannot expect to have a thinking general public when we don’t teach them to reflect on what they read and hear, and when we don’t respect divergent thinking.

We also have to look at the way we teach (or don’t teach) empathy. We have a rising epidemic of bullying in schools and very little has been done to change it. It’s not surprising that much isn’t done, either — harried teachers who frantically teach to the test don’t have time to deal with things like respect and understanding how others feel. Our society seems to think that bullying is somehow funny (I’ve written about the worrisome pervasiveness and popularity of bullying on TV shows before). Is it surprising, then, that our society would be enthralled by a bully like Donald Trump?

I do believe that fear of the future and a disenchantment with the government have a lot to do with Donald Trump’s popularity. But I think it goes even further than this. When you have a population that isn’t taught to think critically and you combine that with a society that believes bullying is somehow funny and entertaining, you have the perfect environment for the Trump phenomenon to grow and flourish.

Hopefully Trump won’t be elected. And hopefully this will serve as a wake-up call and we’ll begin to make changes. We need an education system that does not emphasize standardization, but instead encourages thinking outside the box and logical reasoning. We need an education system that focuses on helping students become respectful, empathetic citizens who don’t support bullies. Because do any of us want to get back on this media bandwagon the next time a bully decides to run for the presidency?