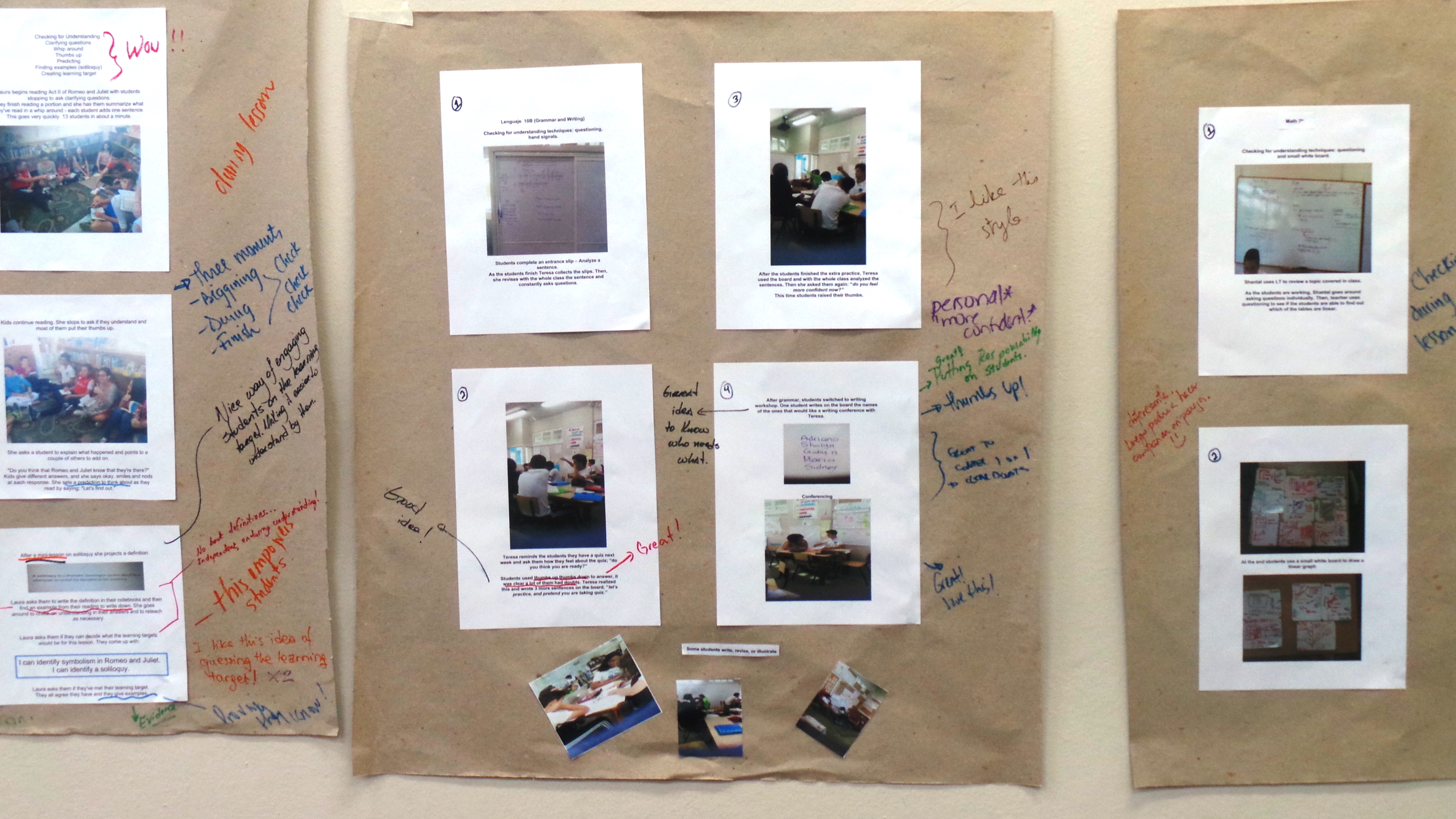 One of the most important things we can do as educators is learn how to check for understanding as we teach. Using ongoing assessment techniques helps us decide if our students getting it, if we need to speed up or slow down, or if we need to clear up misconceptions.

When to use assessment techniques:

In order to carry out effective ongoing assessment, teachers need a toolbox full of techniques that they can use in their planning or reach for at the spur of the moment. If not, it’s far too easy to fall back on the all-too-common, “So did everyone get that? Any questions? No? Okay, let’s move on…” To try and bulk up our techniques, we observed teachers around school last week as they checked for understanding. We then shared their techniques among all teachers in a gallery walk  so that our teachers could learn from one another and maybe add a few ideas to their teaching toolbox. Here’s a few of the techniques we shared: 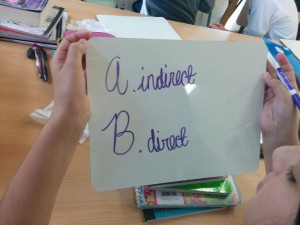 When we observed her class, Omaura checked to see how well students understood her lesson on direct and indirect characterization by using examples. She projected examples of each and asked all students to identify them on mini-white boards. At a glance, she could see if she needed to reteach.

She also asked students to write an analogy about direct and indirect characterization to check for deeper understanding of the concept.

After a lesson on stories’ pacing, Cheryl asked the students to respond to a prompt. They each had one minute to do so. She collected these and used them to prepare for her next writing workshop.

After reading Act II of Hamlet, Jean split her class into two teams. Each team was assigned a character from the play, and for one minute, the team members had to independently write as many short descriptions as they could about that character. The first team then stood up, and each team member had to read out a description, making sure not to repeat what had already been said. Team 2 listened to make sure the descriptions were accurate and to catch any repetitions. Students actively debated descriptions and listened to each other carefully while Jean documented students’ understanding. A lot of laughing and learning went on. 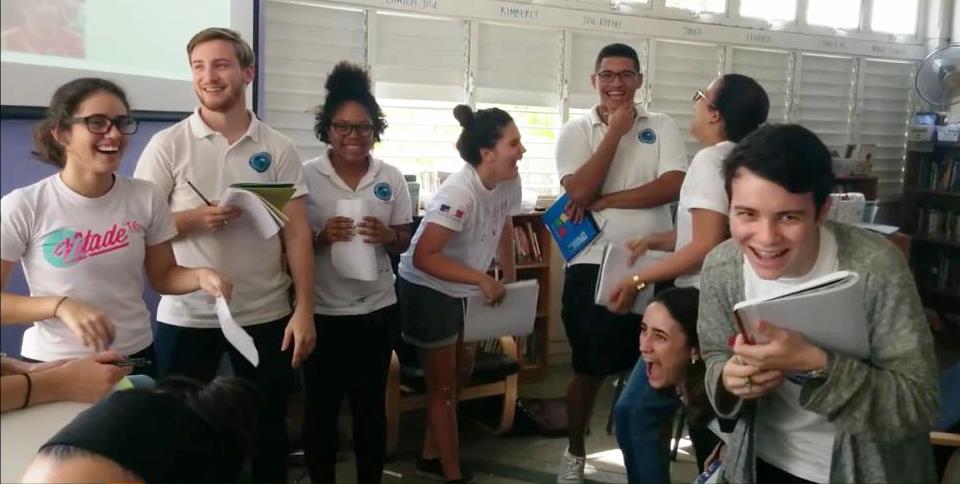 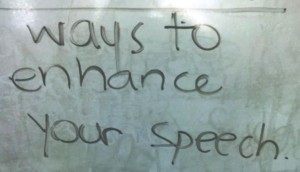 “figurative language.” First, she had them brainstorm types of figurative language, and they came up with: simile, metaphor, alliteration, personification, onomatopoeia, and hyperbole. She then asked them what they all had in common and to come up with a five-word definition that expressed this. They struggled and she noticed that they had the misconception that figurative language is only used in writing. After clearing that up and discussing back and forth, the students came up with their final definition. Throughout the process, Nathalia assessed each student’s understanding of the concept. 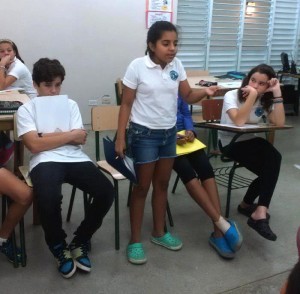 Student arguing why she strongly disagrees.

Pia had her students read a statement and decide if they agreed, strongly agreed, disagreed, or strongly disagreed with it. Each student then moved to a corner of the room that represented their opinion. In this particular class, students either strongly agreed or strongly disagreed, so two groups were formed. The students met in their groups and were given time to decide on the evidence that supported their opinions. The two groups then held a lively debate to present their points of view. 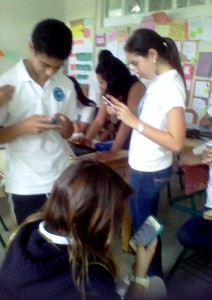 Aída used Twitter to check students’ understanding. She tweeted a question about the main character of their current shared reading book, Loella. The students responded using the hashtag #tcflloella. Students quickly became engaged in tweeting their own comments and in responding to other tweets. Aida could read through the comments to assess her students’ depth of understanding.

After the class finished reading a portion of Act II of Romeo and Juliet, Laura had them summarize what they had read in a whip around: one student constructed a sentence  about what happened and each student after that added on a sentence of their own. In just over a minute, Laura was able to assess her students’ understanding and clarify any parts of the scene that were unclear. 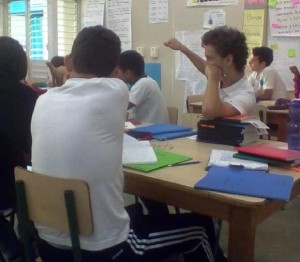 On an entrance slip, students analyzed a sentence for grammar. Teresa then put the sentence on the board and had the students analyze it together, correcting any mistakes they made and explaining misconceptions. She then told the students that they’d be quizzed on this in the following day’s class, and asked if they felt ready. Most of them put their thumbs in the middle and shook them in a so-so motion. Realizing that many of them still had doubts, Teresa put three more sentences on the board. After working through them, she asked again how they felt. This time they securely put their thumbs up. 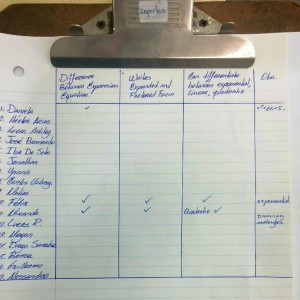 Ailyn had assigned three math questions at the beginning of class to see how students were understanding what they’d covered so far. On her clipboard, she had a chart with the questions on it, along with students’ names, and she could quickly jot down how each student was doing as she moved around the room.

Socrative is an educational app that allows teachers to ask students different kinds of questions (including short answer, multiple choice, and true/false) and see their answers immediately. Lincoln used it during his 12th-grade history class and asked students an open-ended question. He was able to see all the responses in real time, allowing him to immediately decide whether to move on in his lesson or reteach. Because answers are tabulated and saved so that teachers can refer to them later, this app does double duty as a great documentation tool.

This is another app that easily allows teachers to take notes on students’ behavior and understanding. With their smartphone or tablet in hand, teachers can quickly jot down how a student is doing in class in order to track their progress and analyze their learning.

It’s undeniably easy to fall back on familiar questions like, “So, does everyone understand?” But when teachers make a consistent effort to use more effective techniques to check for understanding and adjust their teaching, they begin to create a learning environment where all students can learn.