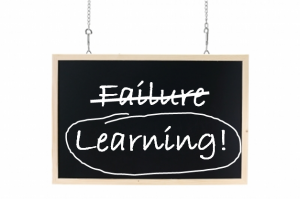 The other day, I watched a TED talk by David Damburger called “Learning from Failure.”

It’s about how NGOs working with aid in foreign countries need to admit failure and learn from their mistakes. What struck me most was when, at minute 9:15, Damburger talks about his own failure with a project he worked on in India. He tears up at this point and has difficulty finishing his sentence. He says, “Admitting failure is actually quite hard, and I didn’t tell many people about this.” Standing in front of that audience and admitting his own failure was an act of courage. He had spent a great deal of time hiding his failure from family and friends. But he finally came to the realization that hiding failure is not only bad for him, but harmful for everyone else who will come after him, trying to improve the world. Admitting failure, analyzing it and publishing it not only allows him to learn from his mistake, it allows all other aid organizations to learn as well.

But letting go of ego, even if it’s for the greater good, is hard.

After seeing how difficult it was for Damburger to admit his mistake, I reflected on my reaction to his admission. Did I feel scorn? Contempt? Pity? No, not at all. I felt nothing but respect for his ability to stand up in front of a crowd and admit to failure. I know that doing this took humility and courage – two qualities which I can only admire.

As teachers we take risks and try new strategies all the time. It’s important that we’re courageous enough to share our successes and our failures, so that we can all learn from them. I know many of us don’t like to share success because it may sound like bragging, and sharing failure is just plain hard. But when we share, everyone learns, and our students are the beneficiaries. When we admit to our students that we’ve made a mistake, they learn the important lesson that no one is perfect and that when we slip, we pick ourselves up and try again. Modeling this growth mindset is powerful and teaches them deep and vital life lessons.

My hat goes off to all teachers who put themselves out there daily, trying new things, risking failure in front of a tough audience, learning from their mistakes and forging ahead to make their classes and students the very best they can be. Most people have no idea how much courage it takes to be a teacher — to walk into a classroom and take risks every day. I do know, and I can’t tell you how much I admire and appreciate the work all teachers — both at our school and around the world — do.