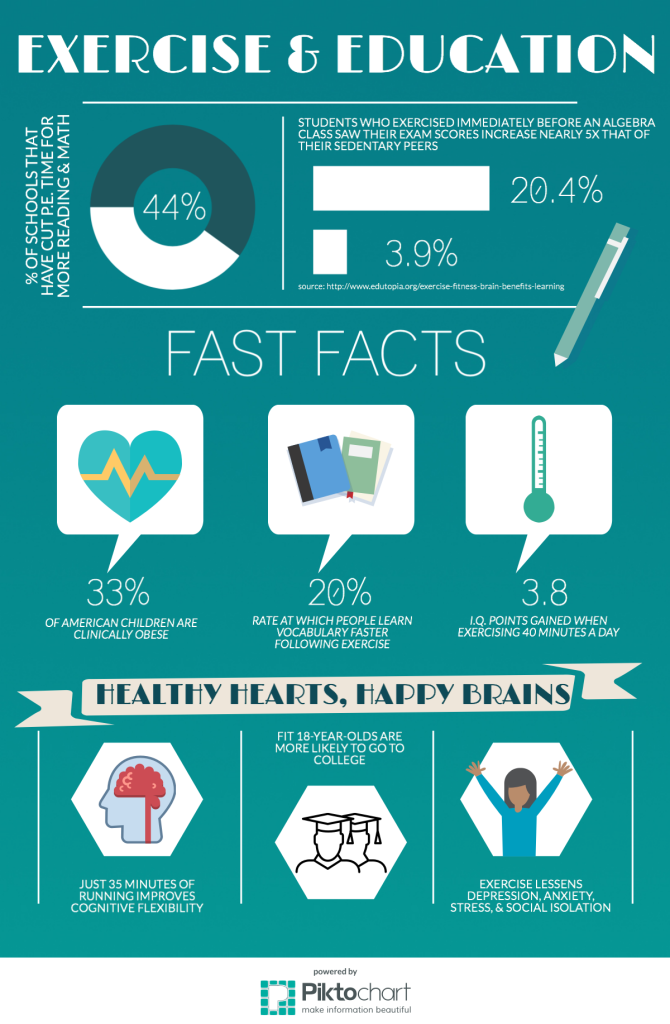 A few years back, I read Brain Rules by John Medina and was struck by just how linked exercise and cognition are. Having been a serial skipper of PE back in high school — I was, and still am, laughably bad at team sports — I didn’t like to think that during my formative years I was mostly avoiding healthy activity. What scares me now is the fact that many schools seem to be collectively following in my PE-escaping footsteps.

Nearly half of American schools have cut their PE time to dedicate more hours to math and reading classes, often to become more competitive when it comes to standardized test scores. This comes at a time when students are already suffering from the effects of sitting still: Less than 25% of children are getting even half an hour of exercise a day; the World Health Organization actually recommends double that for schoolchildren, suggesting they work out for an hour a day. Over a third of American children are obese. But as expectations for students from elementary school to university rise, physical activity levels drop. Administrators and parents are quick to agree — students need the added study time.

But are we doing more harm than good?

Absolutely. It’s been proven that time spent exercising actually improves student scores — in fact, a French study that increased children’s PE time to 8 hours a week (at the expense of other classes) showed improvements not only physically and psychologically, but academically as well. Even 20 minutes of walking can increase blood flow to brain areas in charge of cognitive processing for up to an hour. Three months of exercise can blood flow boosts to areas that tackle memory and learning. And physically fit children tend to outperform their peers academically by up to 30%.

It’s counter-intuitive, but cutting class time to add in exercise is one of the quickest ways to see physical, emotional, and academic improvements in students. Here’s a few tips to add more movement to the school day:

P.S. — Like the infographic above? I made it using Piktochart, an awesome tool for making infographics, reports, charts, and presentations.