This is the second article in a series about sustainable environmental projects in schools, by guest blogger Laura Tejeda. Read her first post here. 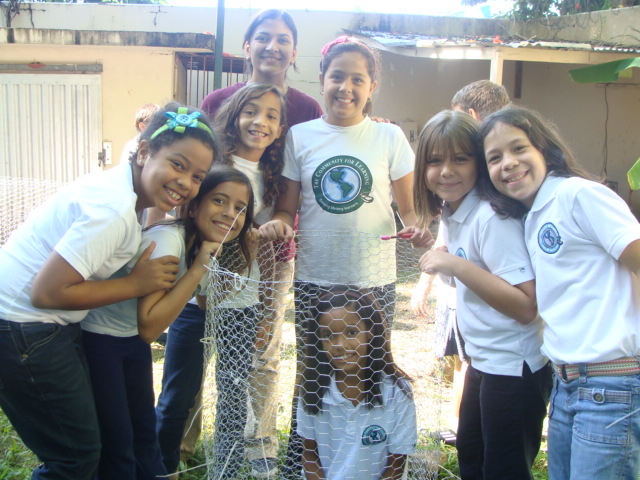 In a country with limited resources and space like the Dominican Republic, you would think garbage disposal would be a government priority. You might think that solid waste would be properly managed and non-biodegradable materials would be frowned upon, or at least fined, but this is  sadly not the case. Santo Domingo is often covered in garbage, and when it rains, chaos reigns.

When I discussed a composting project with the 5th grade teachers and Gaby Flaquer at TCFL, they were psyched, and I was relieved that they were. Children would attempt to turn school lunch waste into compost, which would later be used for another project: the 6th grade school garden. It sounded like an awesome idea until the pre-tests revealed my worst fear: students were apprehensive (to put it nicely) about working with garbage. Being far away made me feel like my hands were tied – what could I do to help this group of 5th graders want to literally get their hands dirty? 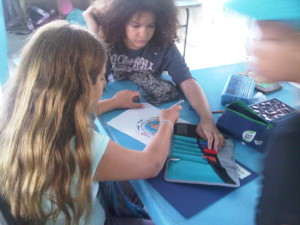 Have no fear! The TCFL teachers and students embraced the challenge and after holding brainstorming sessions about the reasons for composting and doing some research, our 5th graders were ready to save the world by composting their school lunch waste. While the children had unrealistic expectations about how much of an environmental impact the composting activity would have, they managed and created their composting program from beginning to end. Students felt empowered to make decisions and suggestions, and responsible for the outcome. 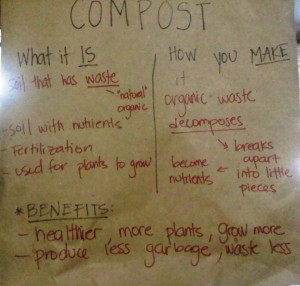 Class chart – what is compost? 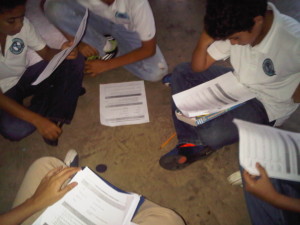 Working out the kinks and tying up the loose ends was the hardest part of the project. Teaching an entire student body and school staff how to discard lunch waste properly took almost all of their time. By the end of the school year, the strategies involved in discarding compostable lunch waste was securely implemented with a minimum of garbage sorting. Although no actually usable compost was produced in our first attempt, the message about reducing waste was propagated throughout the school. The school cafeteria was no longer serving food on Styrofoam containers and began using reusable, washable plastic trays and paper – that alone was a small victory we had to celebrate. Parents started hearing about our project through the students and were all about supporting it – perhaps they didn’t start doing it at home just yet, but hey, letting your kids play with garbage was a big enough step for the first year!

The beginning is always hard, but watching children become independent and creative problem solvers is worth all the worry and hard work. The future of composting in TCFL looks brighter as it approaches our third year of trying, and every attempt makes the future of solid waste management in the Dominican Republic less dirty.