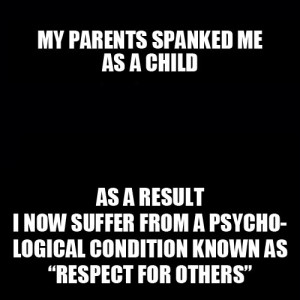 Someone posted the image above on their Facebook wall the other day, along with the statement “bring back the belt.” For a number of reasons, this made me cringe.

First of all, let’s look at the flawed reasoning here. According to this statement, back in the day when kids were regularly spanked and belted (even in school), everyone was respectful. I look back at my own youth and I can tell you this certainly wasn’t true. Many of my friends feared their parents, but didn’t seem to respect them much. They misbehaved and rebelled – they were just very careful not to get caught. They learned how to be sneaky: they were submissive and quiet in front of their parents, seeming to agree with all their ideas, but they laughed at them behind their backs and often seemed to enjoy making them look like fools. Fear certainly did not equal respect.

This statement also draws the conclusion that the only way to teach your child to behave is with corporal punishment, following an either/or view of the world – either you are harsh and hit your child, or you are lenient and your child won’t learn to respect others. At one end of the spectrum is the strict authoritarian parent, and at the other is the laissez-faire permissive parent. Neither parenting style is very effective, though. Let’s look at what they entail and how they affect children:

The children of authoritarian parents tend to be anxious, may be aggressive or fearful, and can be overly shy around others. They often have low self-esteem and self-confidence. They lack social skills and therefore have difficulty in social situations. They also tend to have difficulty taking initiative and are therefore dependent on others. And rather than being respectful, they may be defiant.

Children raised by permissive parents lack self-discipline and are often unmotivated. They tend to have poor social skills and may be self-involved and demanding. Because of the lack of boundaries and guidance, they may feel insecure. They don’t learn to monitor their own behavior and are often disobedient and impulsive.

So, what’s the solution?

Good parenting isn’t about being on one end of the continuum or the other and it isn’t black or white – there is a middle ground, the gray area between authoritarian and permissive parenting. Democratic parents treat their children with respect. They are gentle and fair while, at the same time, being firm and having high expectations. These kinds of parents tend to have children who are happy, self-confident and motivated. These are the kids who are able to control their own emotions and have strong social skills.

It’s in this middle ground that we’ll teach our children to respect others as well as themselves. Bringing back the belt is not the answer.