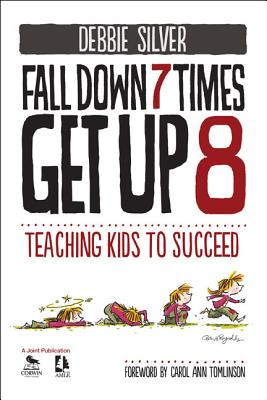 I’m trying to put my finger on what makes Debbie Silver’s book, Fall Down 7 Times, Get Up 8, so inspiring.

There are a few books I’ve read in my teaching career that gave me an about-face: the ideas were a lightning bolt that utterly changed the way I taught. For example, when reading Nancie Atwell’s In the Middle (so many years ago), I was introduced to writer’s workshop for the first time and my classroom was never the same again. Fall Down 7 Times, Get Up 8 is not like that – it’s not about making a radical change in education. Silver doesn’t introduce anything mind-bogglingly new, but she does something that I find even more difficult – she brings abstract educational theories down to a level that we can understand and implement. Her book is indisputably one of the most motivating educational books I’ve read in a long time.

Many of the ideas she writes about are concepts that teachers are probably familiar with, that they’ve studied in education classes, and that they’ve thought about over and over again in the past. But it’s the way Silver organizes them, the techniques she suggests, and the examples she uses that give difficult theories a fresh twist and make them seem doable. We often read about educational theories only to think, “yeah, okay, but how do I do this?” Debbie Silver takes these concepts and shows us how to put them into practice in our classrooms. I loved her book so much, that last year I decided to use it in our weekly professional development in TCFL’s secondary school. As anyone who works in high school will tell you, motivating teenagers is not an easy task. “How can we inspire these kids?” is a question that comes up repeatedly in our staff meetings.

We started our series of workshops with an introduction to the book, using the ideas from Chapter One. After that, groups of 2-3 teachers chose a chapter to teach to the others, and in our weekly professional development meeting, we discussed the ideas they presented. It was  a phenomenal learning experience. After the training, I observed a chemistry class in which the kids were on-task, engaged, and obviously enthusiastic about what they were doing. When I discussed the class with Dennis, our chemistry teacher, he said, “Hey, it’s what we’ve been learning in professional development. That stuff really works!”

So what “stuff” is Dennis talking about?

As teachers implement these methods, they’ve seen students respond quickly and positively. A weak math student decided she could learn math and became one of the most involved kids in the class. A failing student who insisted that he hated school, came in to my office to tell me that he’d changed his mind, school wasn’t so bad, and he was surprised to see that he could do the work. Power struggles between certain students and teachers disappeared. By giving us concrete techniques that we can use on a daily basis, Silver has empowered us in our teaching, giving us the tools to be more successful.

P.S. Our elementary teachers are in the midst of doing a book study of Fall Down 7 Times, Get up 8 and are loving it!