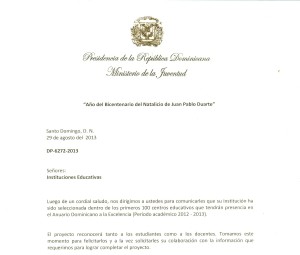 Last week we were informed that the Dominican government had chosen TCFL as one of the top 100 schools in the country. Our first reaction was to feel pleased and proud. However, in looking at this “honor” more closely, we realized that we had no idea what it meant. We were not told what the criteria for this award was… were we being judged for our grades on the national exams? Unfortunately, like most standardized tests, these don’t measure our students ability to think deeply or creatively. Were we being judged on our physical plant? All this would denote is that in a very poor country, we’re one of the richer schools. Were we being awarded for having an outstanding team of teachers? That would truly be something to feel proud of, but how would the government know? They don’t observe our teachers and have no idea of the innovative things we’re trying to do on a daily basis.

So basically, this honor is empty and meaningless.

But, fine, we were willing to accept the accolade and have our name put in the “Annuario Dominicano a la Excelencia” a publication that would let the country know we were among the best.

In order to do this we had to choose the most outstanding student from each of the 9th – 12th grade classes. We were also supposed to decide which teacher was the very best and we were to send those five names in to the Ministry to be published in their book. I met with Lincoln (our academic director) to do so, but the first question we encountered was: How do we choose our best students? They’re all so good. They all shine in one way or another. Who’s to say which student is “the best”?

What this all comes down to is: our notion of intelligence does not mesh with the traditional one. What is the ultimate measure of intelligence? High grades? Being good at math? Being an incredible artist? Being able to argue a point? Having a wicked sense of humor? All of these are forms of intelligence and no one can say that one is more important than the other.

As Sir Ken Robinson tells us – intelligence is so much more than the traditional definition:

Lincoln looked at the papers we were to fill out and said, “Carla, this just goes completely against our philosophy.” And he’s right. There is nothing about this honorary mention that fits with our school and our beliefs.

We’d like to thank the government for recognizing something good in our school (whatever it may be) but if we are to remain true to our philosophy and our beliefs, we simply cannot accept this recognition.