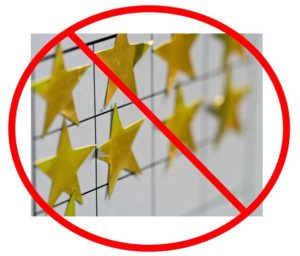 The other day, during a #HackLearning chat on Twitter, we talked about praise and intrinsic motivation. I mentioned that in our school, we haven’t used rewards for 18 years and that our students have high levels of internal motivation. Someone asked if I had documented how we went about doing this. Looking through my blog posts, I realized that although I’ve written about our “no punishments” philosophy before, I’d never written about our “no rewards” policy — which is strange, because I truly think it’s the driving vision behind our school.

Twenty years ago, when Tami (my business partner) and I began dreaming up the school we’d like to open, we happened to read Alfie Kohn’s book, Punished by Rewards. His words resonated deeply with both of us, to the point that our entire philosophy was built around his thinking. (In my heart, I actually think of us as an “Alfie Kohn School.”)

In a nutshell, Kohn explained that when we reward children for their work or their behavior, we teach them that the reward is everything, and they become extrinsically motivated. This can work fairly well when kids are young and a sticker is enough to get them to make their bed. But as they grow up, the rewards need to become bigger and bigger to be effective, until the rewards stop working at all. What’s even worse is that rewarded kids stop doing things for the internal satisfaction they should feel when they’ve met a goal or succeeded at something. All their positive feelings come from outside themselves — from external praise or rewards — which is extremely detrimental to their self-esteem.

So what did we do?

We got rid of grades (in elementary school, at least — we haven’t been able to do it in secondary yet). We stopped providing As, Bs, Cs, and number grades, and instead gave students feedback. At first, parents were nervous. How would they know how their child was doing? But very quickly, they realized that narrative comments told them a lot more about their child’s learning than a B or an 85% ever could.

We outlawed stars, stickers, and smiley-faces. Honestly, the people who had the most trouble with this were the teachers! We enjoyed sticking on those little gold stars. But our students didn’t seem to miss them at all. “I love the way you describe your puppy in this paragraph — I can see him, hear him, and even smell him!” was so much more meaningful to them than a star or a happy face.

No pizza party bribery. Rewards can also take this form: “If you all do well on the quiz, we’ll have a pizza party!” When we say things like that, we instill the idea that learning shouldn’t be the goal… no, the prize is what we’re after. This doesn’t mean we can’t celebrate learning, of course, but we need to phrase things differently. “Wow! We’ve worked so hard. Let’s have a pizza party to celebrate!” is totally fine, as long as the party is not the carrot stick that drives the learning.

Goodbye to honor rolls! Honor rolls are a double whammy — once a student makes the honor roll, they stop taking risks in their learning due to fear of failure, and students who don’t make the honor roll can’t see beyond that to their other strengths. Schools don’t have honor rolls for their artists or their athletes, so students who aren’t strong academically constantly feel like failures. In our school, we honor all students’ strengths: we get excited about good questions and critical thinking and we honor creativity and perseverance. All students feel good about who they are, not just the students who do well on tests and homework assignments.

At first, parents missed the “proud parent of an honor student” bumper stickers on their cars, but they got over that fairly fast once they saw how motivated their children were to learn.

No award ceremonies. We don’t give awards of any kind. If students are good at sports, they know it and can pat themselves on the back. If they’re artistic, their work speaks for itself. We teach our students to set goals, meet them, and feel good about their accomplishments, which is a skill that will serve them for the rest of their lives.

Did the “no rewards” experiment work? We’re convinced it did. We’ve been following this philosophy for 18 years now, and it serves as the backbone of our school. Most of our students are internally motivated risk-takers who love learning for the sake of learning, and who keep learning long after they leave our school. Thank you, Mr. Kohn!