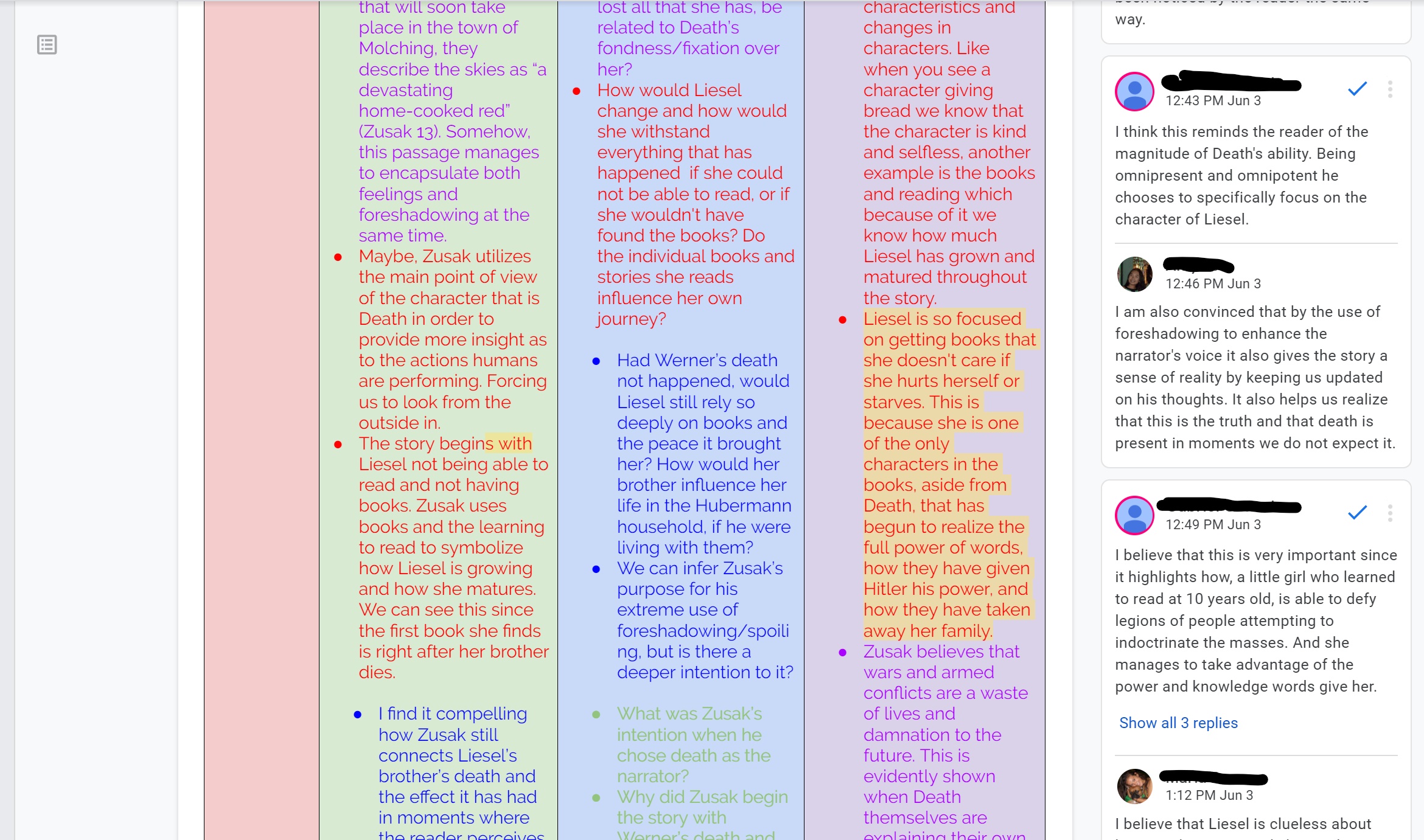 Example of one group’s work in our virtual TQE discussion.

A couple of years ago, I came across blogger/educator, Marisa Thompson’s idea for class discussions: “TQE,” which stands for “Thoughts, questions, epiphanies.” TQE is an amazing way to put class discussions in the hands of our students: in groups they share their own thoughts and questions and choose the ones that will lead their conversation. In doing so, they become much more engaged. After the first TQE I hosted in my language arts class, when the students reflected, they all agreed: “This is the best discussion we’ve ever had. There were no awkward silences.” When I asked them why, one student said, “I guess because the questions were ours and we really cared.”

I continued to use TQE, in the classroom, but I didn’t see how I could use it when we went virtual.

When I began teaching remotely last March, my 11th grade language arts class was struggling to have meaningful conversations about their reading. Three or four students would take over the discussion, while others shut down completely. Muting students and having them unmute to speak really does not lead to a dynamic discussion. Since talking about our reading is the heart of my class, I needed to find a solution quickly.

Fortunately, I came across this tweet by Meghan Jones :

Check out some snippets of the deep, meaningful discussion my Honors 9 Ss have been having on Romeo and Juliet 🥰 https://t.co/eJScOukuHA

It was a colour-coded TQE document which allowed the students to have a discussion by attaching comments. I contacted her and she kindly sent me the template she had created (my Twitter PLN rocks!). Students colour-coded their names and then used that colour to write their ideas under columns labeled: thoughts, questions, and epiphanies. Once they were finished, they commented on each other’s posts and replied to each other in a silent discussion.

I loved this idea so I borrowed the template and then decided to take it one step further, giving students an opportunity to speak as well.

The discussions were awesome! Being in small groups allowed everyone to have a voice. This was the closest we’dd come to having a discussion that resembled what we had done in class. Watching the kids in action, I was so impressed with the depth of their conversations and how seriously they took their work. But how could I assess them? Some students didn’t seem to speak much when I was in the room, but maybe they did when I wasn’t there. I decided they should be in charge of their own assessment. 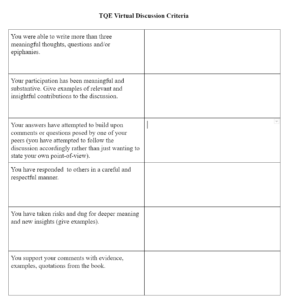 The second round of self-assessment was so much more reflective and honest. Students learned a lot about themselves, writing things like:

Benefits of having students self-assess:

When I surveyed the class at the end of the year, this activity came up as everyone’s favourite. It takes a village to raise a child and in this case my village was made up of my PLN at school and on Twitter. Thank you Marisa, Meghan, and Omaura for your support and sharing!