This is a guest blog by Dennis Negron, the Community for Learning’s secondary school science teacher and teacher leader. Working with project-based learning, Dennis is constantly looking for ways to connect students’ learning to the world around them. Contact him on Twitter: @dennisdachemist

Since the Community for Learning began to build its campus 12 years ago, we’ve played with the idea of “going green” and producing our own energy. At that time, students researched different forms of sustainable energy, but all of them were far too expensive to consider. Then, five years ago, Laura Tejeda — a former teacher who was completing her masters degree in the US — asked me to incorporate a lesson plan she had created, which included activities in the fields of electricity and sustainable energy sources, into my 8th grade class. This was the beginning of a student project that would eventually lead TCFL into going completely solar. 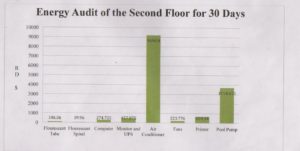 I began by having students complete an energy audit for our campus, which showed how much energy was being consumed at school in an average 8-hour work day. Students then learned how to convert that energy into a cash value. Extrapolating on this information and projecting it one year into the future led to interesting results: several yearly teacher salaries could be paid with the money we were wasting on electricity. Next, I had the students graph the gathered data, analyze the information, draw a conclusion, and present their findings to the administration. The overwhelming evidence presented by the students convinced the school that it was time to, once again, consider renewable energy possibilities. Since at TCFL we try to include the students in all changes, I decided this would be a great project-based learning unit and I handed the task over to my students.

My first step was to assign homework, so I asked students to “find companies that deal with solar panels and installation in the Dominican Republic. Due next class!” During the next class, the companies were listed and selected. The students researched to see which companies looked like they were serious and had a noteworthy track record. Next, they contacted the companies, who came in to see our grounds, analyze our light bill, and make their pitch. With the students’ help TCFL selected KAYA Energy Group as the company that would take us to that bright green, environmentally friendly future. KAYA came and explained what their plans for the school were. KAYA also involved the students as much as they could (within the realm of safety) with their planning.

Students were asked to:

Clearly, there was a lot to be planned and worked on. In project-based learning, students work on an authentic problem that is truly meaningful to them. Because it’s important for students to have voice and choice in their work, we allowed students to follow their interests in choosing the tasks they wanted to fulfill. 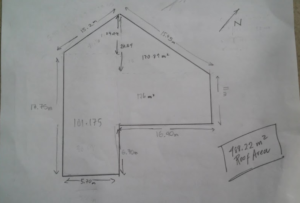 Students building up their sketches from measurements and performing area calculations. Finally, math is useful! 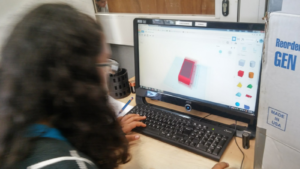 Student working on her 3D model of the roof in order to show her idea for the solar panel lay out.

Students working on their drone design in order to get the movement they wanted from the camera when recording while minimizing vibrations. 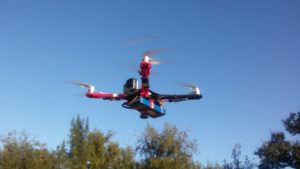 A 3D-printed drone, designed and assembled by the students in makerspace, was used for reconnaissance work during their interaction with KAYA.

After all the legalities and money exchanges occurred, it took KAYA a total of three weeks to install the full turnkey hybrid system, which consists of 138 300-W solar panels cranking out a maximum of 41.4 KW, with no battery bank but a bidirectional meter. That is enough energy to power the school and inject our surplus into the grid, and the estimated time for full return on the investment is between 36-38 months. The electricity gauge that comes with the system allows for monitoring both on the LAN and through the internet to any off site location.

Image of the e-gauge screen that shows production (the green) over usage (the red). This was the first 24 hours we metered. Note the excess of 145 kwh produced.

In short, the school has made a bold, but wise investment, as the image above shows, by moving towards the seemingly endless power source of solar. In another 18-20 years, the panels will have to be replaced, but by then we will have produced 15 years of “free” energy, and we’ll have saved the atmosphere from tons of CO2.

The Community for Learning believes in practicing what its educators teach in classrooms. Hopefully, after taking such a hands-on role in crafting the school’s green future, the children of our school can influence their parents now and, later on, the industries they’ll come to work in — all the while maintaining their life-long learner status.